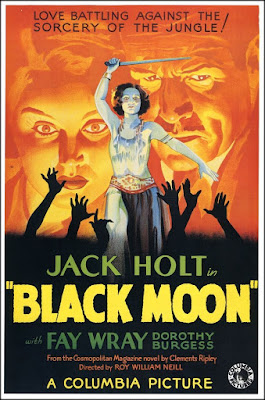 Juanita is lured back home to the old haunts of childhood by a voodoo curse, its mystic rhythm in her very flesh and blood as undeniable as her own beating heart. Director Roy William Neill and DP Joseph August are like Alchemists, combining disparate elements of melodrama and horror into a magical elixir. The use of overpowering shadows and dutch angles pared with sharp direction and editing would later be perfected by Jacques Tourneur in his work for Val Lewton.

Juanita must return home to the island of St. Christopher. As the film begins with an extreme close-up of her lovely visage, her eyes seem focused past the camera and into some ethereal realm of consciousness as she plays a rhythm on a native drum for her little girl Nancy. Her husband Stephen must work but agrees that she, Nancy and the nanny should take a boat and revisit her childhood home, unaware of the dark violent past of her childhood. Enter the beautiful secretary who avows to resign from Stephen’s employment stating she is having “relationship problems” which is code that she is secretly in love with him. Stephen is just thick enough not to notice and Gail just naïve enough to conceal it. But Stephen convinces her to travel with his wife and decide on her job when she returns. Such a trite little melodrama is soon merged with the supernatural horror of voodoo sacrifice.

Juanita's uncle is angry when she appears at his estate (the very place where her parents were sacrificed!) but she is candid about her desire to stay. Soon her husband joins her with his sidekick Lunch (a wonderful Clarence Muse) and her strange disappearances into the jungle cause alarm. Until one night Stephen and Lunch stealthily follow her and see her participate in a voodoo ritual. The religious and sexual energy is released like a frenzy, a rabid danse macabre and Stephen, unable to remain passive, shoots the priest when he’s about to murder Lunch’s girlfriend! The feverish congregation gasps and Juanita picks up the machete and delivers the killing blow! Holy shit, maybe time for a divorce.

The final act involves the fight for survival between the hysterical parishioners now led by Juanita and the new family unit of Stephen, the child and Gail. With the uncle and Lunch, they barricade themselves in the estate’s tower. Hell, Juanita almost sacrifices her own child to the voodoo gods and to Gail’s credit she never reveals her secret until the wife becomes ex. When they are burned out of the tower, locked behind heavy doors with nowhere else to run, the skewed angles, long shadows and thick smoke slowly devouring the frame is very suspenseful.

Though the film is ripe with contemporary racial stereotypes about voodoo and the black islanders, it earns some credit with the heroic role of Lunch as a secondary character with ample screen-time. The acting is mostly wonderful: Fay Wray as the stoic secretary who hides her true emotions, Dorothy Burgess as the cursed wife and Clarence Muse as the staunchly loyal cohort. Jack Holt’s performance is rather bland and dimensionless yet he has an earnest quality about him. Overall, a really good film that comes together into a satisfying whole.