NO REGRETS FOR OUR YOUTH (Akira Kurosawa, 1946, Japan) 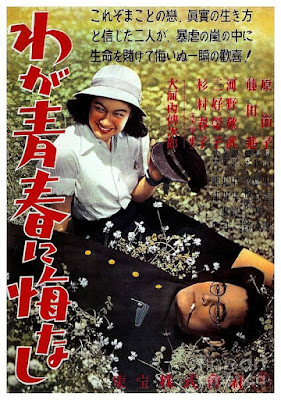 Yukie’s gentle hands once danced upon ivory, a brisk stroll through Mussorgsky’s Exhibition, but now she tills the fields of despair and torment. She and her two admirers, Itokawa and Noge have become a triumvirate of crushed flowers, floating upon the currents of fate...but offering no regrets for their actions. Akira Kurosawa walks the razor’s edge of political dramaturgy and stark melodrama but successfully hones his narrative point because he doesn’t judge, he is only concerned with the effect upon the naïve Yukie, daughter of Kyoto professor Yagihara who is removed from his prominent position because he opposes war.

The film begins innocently enough with a student picnic in the mountains, as Yukie flirts with both her admirers, and soon the staccato rhythm of gunfire echoes through the valley. Yukie jumps to her feet proclaiming she loves the sound of machine guns…and Kurosawa then cuts to their shocked expressions and slowly pans down to a dying soldier shivering in the tall grass. Suddenly, revolution is deadly lead and not just wooden prose. Kurosawa utilizes a magnificent five-year match cut from drunken Kyoto college students mumbling songs of protest to the same students marching as soldiers singing violent national anthems.

The film’s core is experienced through Yukie’s perceptions, a girl who has grown into a woman: she spurns Itokawa who becomes a successful Prosecutor for the State and yearns for Noge, who is in prison for his beliefs. But Yukie doesn’t hate Itokawa, she doesn’t judge him for his polemics, she loves Noge for himself: she makes no political statement and only wants to accept responsibility for her choices…because they’re hers to make. Kurosawa declares the contradictions of youth, evident in Yukie’s quicksilver moods, but she eventually must learn independence and live for herself. She marries Noge who is executed for treason, and she takes it upon herself to visit his expatriated elderly parents and fulfill her familial duties.

Kurosawa shows that there are no winners in extremist creeds for both the Japanese government and the farmers are ignorant and brutish. Yukie and her in-laws are maltreated by the locals to the point of starvation and death…but she endeavors to persevere. With their rice crop destroyed, Yukie’s bloody hands began to plant each stalk one by one, and this spiritual seed grows in her elderly father-in-law, a man who has given up on life, until her powerful spirit rekindles his pride. After the war, Noge’s actions are vindicated and he is now a hero, and Yukie visits her wealthy parents, but her calloused hands are now strangers to the piano. So, she returns to Noge’s family and lives a life of her own design…without regret.