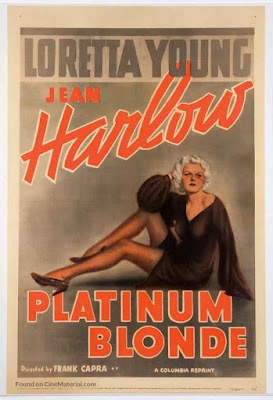 Stew stews about becoming a Cinderella Man to his high-society wife though he attempts to maintain his job and working-class dignity. Frank Capra depicts two disparate lovers and their class consciousness and examines the great divide between them. The story may take the side of the blue-collar workers but not totally at the expense of the stuffy hierarchy. Capra depicts flaws in both social strata and doesn’t condemn Ann Schuyler (Stew’s wife); in fact, Ann is quite lovely and adorable but their differences seem to be embedded in their social DNA.

Stew (Robert Williams) is an Ace reporter smart guy who pals around with his sidekick Gallagher (a beautiful and winsome Loretta Young) but doesn’t see her as a love interest, merely just “one of the guys”. This requires the audience to use all of their willpower to suspend disbelief! When reporting a story on the Schuyler family he falls in love with Ann (a platinum haired Jean Harlow). They elope and the story becomes a battle of willpower between Stew, who wants them to live on his salary and in his apartment, and Ann (and extended family) who wants them to move into the West Wing of the estate. There is such a cute scene between Stew and Ann as they sit on a bed and sing a childish rhyme to each other, Ann kissing him on the nose, that it’s impossible to condemn either character as wrongheaded: they are just unable to change into something they are not. Jean Harlow is wonderful as the wealthy daughter and many reviews believe she was miscast. I disagree; she is more like the black-sheep of the family and not totally reflective of all the pomp, circumstance and histrionics of her mother. We can see the woman under the veneer of aristocracy that Stew falls in love with. This makes the dissolution of their marriage more heartrending as the potential is wasted because they are both stubborn. Stew is a wiseacre ready with a comeback either verbally or with fisticuffs! Loretta Young’s role is third in the triptych of stars but no less endearing.

There are quite a few wonderful moments such as Stew’s going all Edvard Munch in his wing of the mansion, his scream echoed back to him like a ghostly accusation. He gets the Butler in on the act too. When Stew asks the Butler (Halliwell Hobbes) what he does in his spare time we get a detailed explanation and performance of “puttering” and it’s magnificent. Then there’s the Ball which is contrasted with Stew’s cohort’s drunken revelry and both have a dramatic fallout. There’s a great scene at the Ball when Gallagher and Stew are talking in the garden and Ann watches from above: DP Joseph Walker frames it in an extreme low-angle shot giving Ann the high ground while the two “friends” are mired in lowly shadows. Stew approaches Ann and they both loom over poor Gallagher as if she’s the one who is morally inappropriate. Then the final act turns all meta as the play Stew is writing becomes the very film we are watching! Robert Williams is able to subtly express his realization that he does indeed love Gallagher, that he has always loved her but was blinded by platinum tresses, and the final embrace is achingly beautiful.