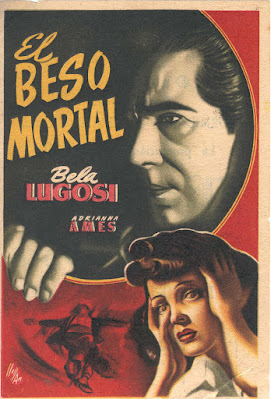 Marcia Lane is on a one-way, dead-end street unless her screenwriter paramour correctly interprets the criminal codex. An enjoyable meta-narrative murder mystery set on a fictitious studio lot but filmed on an actual studio lot adds verisimilitude to the narrative. We get to see behind-the-scenes of Hollywood film-making in the 1930s from lighting setups to early sound recording and see the journeymen (and women) who do the grunt work behind the glamour.

The opening shot would make Robert Altman proud in about 35 years as DP Norbert Brodine shoots a long-take through the windows of an automobile as a group of shady characters pull up to a theater. A lovely lady slinks from the rear passenger car door opposite the camera and approaches a well-dressed man. The camera tracks to the right and follows her towards her mark. She surprises him with a kiss and he takes a few steps before being gunned down by off-screen assailants. The camera continues to focus upon the scene as strangers come rushing to his aid while another car speeds off. Then the camera slowly tracks further right and we see a Director and his crew sitting by their equipment contemplating the scene they just shot. CUT. This is the fiction within the fiction we’re watching! Brilliant! But the man is really dead, murdered while filming the scene, and the mystery begins. We get to see the same scene later in the First Act but filmed from the perspective of the fictional crew and it’s static and uninspired in comparison! Of course this becomes evidence that is mysteriously tampered with to delay the inevitable resolution as some clue could have been captured on celluloid.

The plot becomes a bit complicated yet always follows logic and critical reasoning, though the protagonist writer Franklyn Drew is too smarmy and condescending to everyone around him. His smug mug quickly becomes very punchable yet he warms up towards the end and isn’t quite as uningratiating. Marcia Lane is the actress who gave her murdered co-star (and ex-husband) the death kiss (which is the name of the movie we’re watching and the movie they’re filming within the movie we’re watching, cool right?) which marked him for murder both make-believe and real! Is she involved in the killing? Things look sour for her as Drew pits his skills of deduction against hard-boiled homicide detectives who remain one gumshoe behind. Drew also recruits the bumbling studio security guard as accomplice whose rumpled uniform and uneducated sobriety offer counterpoint to his cool and stylish demeanor. To Drew’s credit he treats his cohort with some respect and as an equal, asking advice and gaining perspective from him though the guard remains the source of some slapstick shenanigans. Drew is much more patronizing to Maria Lane and talks for her more than he talks to her.

The final shoot-out is also exceptionally shot and edited, actually utilizing tinted colors for the flashlight and orange flames for gunfire which stand out in the low-key lighted finale. The killer is revealed yet remains in shadow like his identity until the final fall from grace. Was it Bela Lugosi? To reveal the reveal would be the kiss of death.