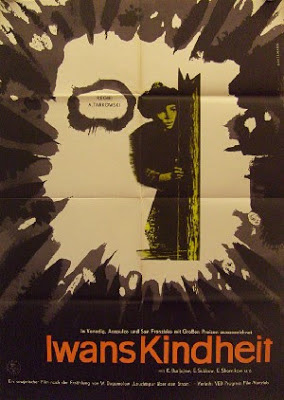 Starlight in a handful of water
Ivan’s brief life is reduced to a cold bloody quagmire; his memories are shrapnel that create a vengeful soldier from the ghost of a child. Director Andrei Tarkovsky examines the intrepid Russian spirit and vicious emotional impact of The Great Patriotic War, refusing to glorify combat and bringing the murderous Nazi occupation into sharp focus upon a few insignificant lives.
The film begins as Ivan dreams of his mother’s gracious smile, embraced by her love then floating away (a great crane shot reminiscent of Fellini’s lucid dream sequence that begins 8 ½)…to be rudely awakened in a cold hideout pursued by German soldiers. Ivan is an advanced scout, a child soldier, because his small size allows him to sneak through the trenches and forests to reconnoiter the enemy forces. He eventually befriends Lt. Galtsev who becomes protective of the boy. Tarkovsky utilizes a linear narrative structure that eschews flashbacks: instead, we learn through dialogue and inference that the Nazi aggressors murdered Ivan’s family and village. This unsettling literary device of being told what happened forces the viewer to imagine the horrors which imbues the film with anxiety, fear, and maddening helplessness because now, in the present tense, we only see the final sum of Ivan's trauma. He has become tainted by the foul stench of death, a wraith whose only goal is to destroy the enemy. He shows little fear and doggedly disobeys orders to be sent away, and vows to avenge the death of his family and compatriots. Ivan is last seen disappearing into the vast swamp on another mission to never be seen alive again.
In the dark night of the soulless, he is possessed by the final pleas of the damned scrawled upon the wall of his hovel. Alone, he stalks an imaginary German soldier with a trophy knife, vowing death to those who have already murdered the humane part of him. Tarkovsky shows very little combat, explosions kept to a muffled distant roar, and instead concentrates upon a few soldiers in their dirty and barren hideouts, making small talk and awaiting orders: battle is kept to a vaporous backdrop. This heightens tension and allows the characters room to breathe, however briefly, and transcend genre simplifications.
Ivan is missing in action for much of the film though his presence haunts the shadows awaiting his return. A minor love story infuses the film with sadness because this basic human desire still exists in the midst of hell, a human need for companionship that inspires jealousy but is subdued by impending doom. In one scene, Masha is passionately embraced above a muddy trench surrounded by a barren forest like bleached bones, as if these soldiers tread tenuously above their own open graves.
Finally, Tarkovsky deliberately utilizes a narrative ellipsis to great effect as the story jumps several months (years?) as the Russians storm Berlin, and with the use of documentary footage we witness the fall of the Thousand Year Reich. We are shown gruesome newsreels of murdered children, some poisoned and others shot through the torso, and we realize that Art and Reality coincide at this hellish nexus. We once again see Lt. Galtsev but now his boyish features are obscured by jagged scars, his eyes hard as the Russian winter. As he searches through the litter strewn room, he discovers a dossier with a picture of Ivan detailing his capture and execution.
But our protagonist lives on in a dream, playing with his family on a deserted beach, seemingly walking upon water…but an ominous decaying tree dominates this fantasy, as intrusive as an exclamation point at the end of a secret. Ivan now runs forever, hand outstretched, grasping air, his life now as intangible as starlight in a handful of water.
Final Grade: (A)
Words Chosen by Alex DeLarge