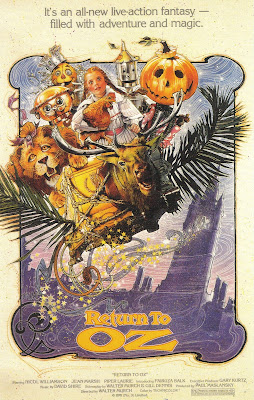 Dorothy’s emerald eyes mirror her aching soul, longing for the marvelous Land of Oz only to find herself condemned to the tortured screams and electric fear of a madhouse. RETURN TO OZ is not a sequel to the musical but an inspired homage to Baum’s classic series, combining elements of Marvelous Land Of Oz and Ozma Of Oz to create a dark fable as Dorothy struggles to save the magical kingdom from Mombi and the Nome King.

Wickedly inventive, Director Walter Murch takes Dorothy on a tumultuous journey across the Deadly Desert and to the crumbling Emerald City, where she faces the strange Wheelers and is saved by Tik-Tok: Murch imbues nearly every scene with some interesting Oz detail and design from the original W.W. Denslow illustrations. The surreal and often stunning visuals and the bizarre characters could have lurched from the subconscious of Terry Gilliam! Dorothy Gale survives the tempest and discovers her old house, rotting and decrepit like the broken brick road, and is saddened to discover that her friends have been turned to stone…or kidnapped by the wicked King. As the narrative progresses darkly, she and her companion Billina the talking Hen adventure with Jack Pumpkinhead (Jack Skellington, anyone?), Tik-Tok, and Gump: Dorothy must use her wits and ingenuity and, with a little help from her friends, restore the rightful ruler of the Emerald City and ends up saving Princess Ozma.

The gentle innocence of Fairuza Balk as Dorothy works wonderfully, and Nicol Williamson as the Nome King (he is also Merlin from EXCALIBUR) is fiendishly enjoyable. Walter Murch is an Academy Award winning Editor and it shows: the film’s pacing and cutting creates just the right amount of suspense while catapulting the plot towards its celebrative conclusion. The final parade is a who’s who of Oz lore and it’s heartbreaking to acknowledge that more sequels were never produced, that these characters shall always remain background ornaments for this decorative finale.

As Dorothy washes back upon the shores of consciousness, we see Mombi’s despicable doppelganger being carted away in a horse drawn prison, her leering toothy grin like splinters of bone. Dorothy is restored to Aunt Em and Uncle Henry but Princess Ozma has granted her willful passage to the wonderful realm…as long as Dorothy keeps her head.