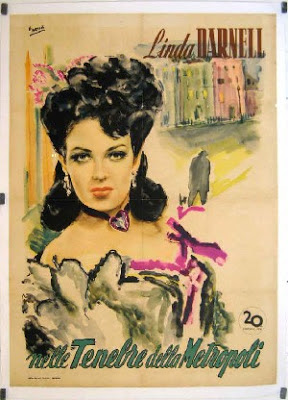 Musician George Harvey Bone lingers amid the 19th century London streets like a bad hangover, suffering a ghost of violent memories that haunt his conscience. The film opens with an excellent shot as the camera races from street level to a second story building and, in Hitchcock-like fashion, through the window glass to the scene of a grisly murder. The protagonist is clearly revealed as he escapes the conflagration in a fugue, seemingly in a drunken state as he stumbles through the midnight streets. We quickly learn that George Bones is the murderer but he suffers from blackouts, an undiagnosed schizophrenic disorder. He even turns himself in to the police with what he believes to be the murder weapon but he is soon released for lack of evidence.

Director John Brahm breaks with traditional formula and doesn't create a whodunit’…he paints a lonely portrait of an artist who has unknowingly committed these heinous acts, a pianist whose tenuous connection to the world is through music: even his beautiful concerto cannot calm the savage beast within his own broken mind. Laird Cregar as George Bone is politely genuine in his performance and domination by Netta, a raven-haired femme fatale, whose love he shall feel nevermore. He spurns the love of his life for the momentary tempest of this affair, and sacrifices his talent and reputation for inane “pop songs” to assuage Netta’s ravenous hunger for fortune. His fugues are provoked by harsh discordant sounds, like the clatter of metal pipes crashing into the street, and he acts upon some primal impulse that becomes a dull ache in the base of his skull.

The marvelous Bernard Herrmann music flits from pop standard to dark brooding piano score; the diegetic music creates visual frisson with the events as they unfold on-screen. George finally kills Netta and disposes of her body atop a bonfire, and its destructive touch eventually becomes a Pyrrhic victory as his final concerto is swallowed by a Hellish inferno.