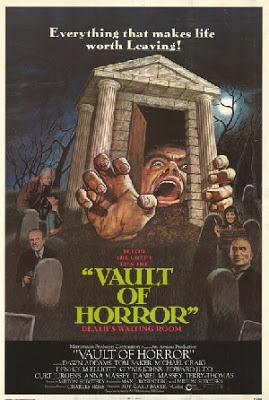 “Heh. Heh. Ready for another fiendish feast? Then welcome to my Blooditarian restaurant; hope the atmosphere doesn't  err…suck! Looks like a seeping serving of supernatural is the soup de jour. What? You’ve already eaten? No matter, you just happen to be on the menu this evening. Fangs for the tap!”

This Amicus produced companion to their first EC adaptation TALES FROM THE CRYPT is just as darkly humorous and enjoyable. Roy Ward Baker takes the helm this time; director of one of my favorite science fiction flicks QUATERMASS AND THE PIT. He competently sews together the five various extremities into a coherent whole, tapping the vein of the delicious corpus delicti.

The story involves five strangers on a mysterious elevator ride who find themselves in a fully furnished sub-basement. They each begin to talk about their insane dreams, which seem so real and convincing. The first story MIDNIGHT MESS (Tales From The Crypt #35) has been altered from the original to make the brother a more despicable and deserving late night snack. Upon reflection, he probably regrets his choice of fine dinning establishments because he is served as a just dessert! THE NEAT JOB (Shock SuspenStories #1) finds the wife of an obsessive compulsive domineering husband finally organizing their cluttered marriage. THIS TRICK’LL KILL YOU (Tales From The Crypt #3) concerns a vacationing magician and his wife who get all tied up over a magic trick…but the husband just can’t overcome his hang-ups. An insurance scam goes awry in BARGAIN IN DEATH (Tales From The Crypt #28). The scammer gets more than he bargained for and digs himself deeper into a hole he can’t escape from. The artist in DRAWN AND QUARTERED (Tales From The Crypt #26) draws a self-preserving portrait…but he should have used permanent ink.

The film ends as four characters wander through the doorway (once the elevator shaft) and into a ghostly graveyard. They each fade away like a bad memory as the final character proclaims their punishment: to meet unknowingly each night and profess their ghastly crimes. For all eternity.

CAVEAT: Good Lord! The Region 1 Midnight Madness DVD contains the censored version of this film! Some of the violence is chopped out: in Midnight Mess, the tap is blacked out and not shown being inserted into his neck; The Neat Job freeze frames on the hammer to the skull; Drawn And Quartered withholds the bloody wrist stumps. The Vipco Region 2 DVD retains these original elements but is cropped to full frame ratio. I think it's ironic that these unexpurgated stories first appeared in children's comic books and were much more bloody and nasty than their cinematic counterparts.
Words Chosen by Alex DeLarge