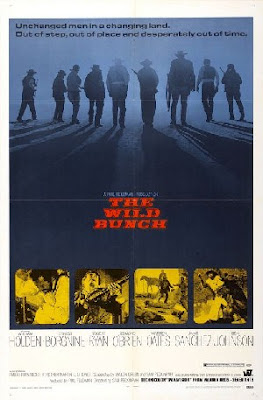 “Wild men who caught and sang the sun in flight


And learn, too late, they grieved it on its way


Do not go gentle into that good night.”
-Dylan Thomas

Pike Bishop leads his men towards a bloody baptism; from his violent pulpit he preaches the end of their era, anachronisms whose surcease is inherent in Lyle’s nihilistic growl of “why not”. The opening credit sequence creates a visual metaphor concerning these renegades: children playing with fire, deadly scorpions trapped in a cage being consumed by ants. Pike and his men are about to be ambushed and eaten alive by this new society commanded by a different type of criminal, a hive mentality that obliterates the old west and ushers in the fat thieving Land Barons and Railroad Men.

Deke Thornton, Pike’s one-time partner and now a man who has sold himself to the railroad, pursues them: as Dutch proclaims, it’s not your Word…but who you give it to that counts. Director Sam Peckinpah has crafted one of the great Westerns, a story of honor and friendship among thieves, allowing us compassion for these bastards who once rode the high country imparting their own harsh judgment upon the weak. The film is structured as a chase with crosscutting between Pike and his pursuers, with our anti-hero always one step ahead, and as fate has it he is able to make one final score before he retires.

Peckinpah dims the line between right and wrong; each character only casts a subtler shadow of corruption. As the infighting reaches a crescendo, Pike realizes that a house divided must fall, and by force of will he is able to keep his gang together to steal guns from the US Army. He even allows Angel to take a case of rifles for his own people at the cost of Angel’s share of gold: an honorable gesture that ultimately leads to their destruction. Peckinpah’s classic slow-motion brutality and frenetic action is counterpoint to the long takes and heartfelt dialogue that balances the narrative, allowing Pike and his men to become human beings and not mere caricature. This becomes very important because we must understand their commitment to Angel when he is captured and tortured; after all, they had the gold and could have disappeared into the Mexican ether. Instead, after each has expunged their last carnal pleasures (except Dutch), Pike’s eye mirror vengeance and he accepts his death…but not peaceably. They know that this is the end game, Mapache isn’t going to give Angel up at any cost, and the final gunfight is a masterfully choreographed initiation into the cruelty of oblivion. Though their pursuers end up with the bounty, it’s the Wild Bunch that has the last laugh.