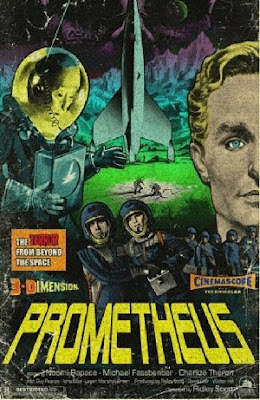 Homo sapiens formed not from clay but from engineered DNA seeded by a race of non-terrestrial titans. But even this clichéd premise cannot hold up to scrutiny when considered within this damaged narrative, as scientists act and speak like buffoons and common sense becomes an uncommon denominator. Ridley Scott should be tied to a rock and have his liver torn out for delivering this cinematic stupidity to the human race.
The film begins with a National Geographic tour of Earth being visited by an albino giant, an alien whose ship hovers in the clinging mist above a waterfall. He drinks a potion and sacrifices himself to conceive life, ripped apart as his DNA infects the world. An interesting premise where a technologically advanced culture holds science and religion (since this must be a ritual) in equal regards. However, this unique idea is cast aside or never considered by the inept cinematic creators. But the story makes little sense even at this point: the Earth that was seeded by the aliens looks amazingly like the Quaternary Period, unlike the roiling oceans and tempest of a young planet where RNA began self-replicating despite the destructive environment. And this begs the question: how could this alien DNA be an exact match to human genetics? Similar yes, but it should show variation since these “Engineers” are 10 foot tall giants!
The story jumps forward to the end of the 21st century where two scientists discover an ancient cave mural that supports their hypothesis of ancient astronauts. I’m not sure many scientists read Erich von Daniken (or watch the History Channel) regularly except for laughs. Based on this flimsy idea, a multi-trillion dollar journey is prepared in a few years to travel towards a planet that may be the genesis of our existence. Why not send an unmanned probe first to gather evidence or make contact? Oh yeah, some rich old guy thinks aliens are God who can perform magic: he needs to speak to these “Engineers” to give him immortality. That is one of the most stupid concepts I have had the misfortune of contemplating.
Enough with the inane plot and I’ll mention a few things (out of many) that bother me. The interstellar ship is also built to fly in a planet’s atmosphere? It must not have cameras or sensors since they fly by visual only and just happen to see Nazca lines that lead them to the one place where the aliens are warehoused. What a coincidence. The “scientists” reactions to this earth-shattering discovery of intelligent life are mind-numbingly docile. These specialists have no problem tainting the environment with their presence let alone themselves by breathing the atmosphere and trodding upon artifacts. There is no procedure to record or preserve this discovery! Remember, this is a scientific expedition and not a group of blue-collar miners who stumble upon an alien spacecraft. Also, you cannot learn an extra-terrestrial language (especially spoken language) by examining ancient Earthly hieroglyphics. And how did the ancients know the “Engineers” even existed? These titans seeded the DNA millions of years before Homo sapiens evolved! Did they visit often? The rich guy’s daughter has a medical pod (of which only a few exist) and it’s calibrated for men only? Wow, I feel dumber just typing this information. Of course, our protagonist Noomi Rapace knows exactly how to operate said machinery when she needs to further the plot. Now, here was an excellent moral conflict to build some serious tension upon. Noomi Rapace is a Christian scientist who thought she could not conceive children and, wait for it….is pregnant with an alien Chthulu baby. It’s called an abortion and should have been a psychological freak-out. Instead she just races to the med pod and works magic. And there’s no way you can have a Cesarean and walk (let alone run) immediately afterwards. Disbelief unsuspended.
In summation, PROMETHEUS is the worst kind of film in that it hides behind a veneer of respectability: it wants to examine philosophical and religious themes and be taken seriously. But it’s all Woo. In Ridley Scott’s world, science and magic are interchangeable. Harry Potter is more believable than this pseudo-intellectual claptrap.
Oh, but the special effects are nice.
Final Grade: (F)