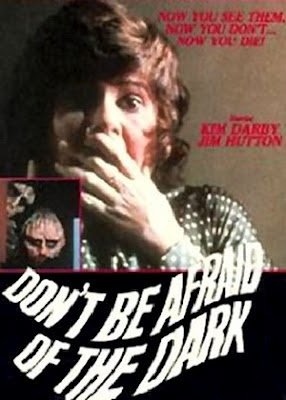 Sally is haunted by more than a trilogy of terrors: a diminished housewife under the spell of patriarchal authority, she seeks fulfillment by decorating the empty spaces of her life. One of the creepiest made-for-TV movies ever produced, director John Newland transmutes a woman’s struggle for liberation into an existential supernatural thriller.
The plot is basic enough for a familial melodrama, as stay-at-home wife Sally and her upwardly mobile husband Alex inherit an old decaying house. This demesne becomes a status symbol, a show piece to suggest to Alex’s superiors that he deserves membership into the “old boys” club, where a promotion means a spiritual demotion for his lovely spouse because his career is more important than his wife. Sally begins to disappear at home, to become an echo in some vast conspiracy of ghosts…or something worse. Sally’s independence leads her to self-destruction when she looks behind the earthly façade and into the abyss, releasing three tiny trolls that torment her but ultimately want to subsume her very soul.
The film is chock-full of scary moments: shrill taunting whispers, tiny bug-like creatures scurrying just out of sight, dark shadows with things bumping in the night, an old man and his dire (though ambiguous) warning and an ancient door bolted closed for no apparent reason. A great setup for a haunted house flick! But it’s the subtext that becomes chilling, as Sally begins to question her status quo in the marriage; the rude beginnings to an uncivil war. She has become a trophy to Alex, a thing that represents his achievements and not hers, a union of one. Her friend is the ultimate Beverly Hills housewife, married to a successful businessman who deals in synthetics, a superficial and plastic sham where her womanhood, no her very humanity, is molded by another’s desire and sacrificed for creature comfort. But Sally’s creatures only offer fear and murder, and the immortal darkness as reward.
The marriage bleeds with normalcy as the story begins but soon dissolves with only the slightest instigation. Alex is often angry and controlling as Sally begins to question her surroundings and seek answers on her own. Her independent actions lead to punishment, both by the little trolls and her controlling husband. The creatures become a metaphor for children, released from the black womb and into a marriage that is already beginning to diminish. Though Sally and Alex never talk of children it is naturally the next step in the progression. And Sally, if she stays in the marriage, will be devoured by the burden, become invisible to Alex and a stranger in her own strange land of identity. She wants out but cannot escape, trapped in a prison of marital remiss. But the “children” finally capture her and drag her back into the ashes and dust, while Alex is lost in misunderstanding. Finally, Sally becomes victim to a patriarchal altruism: a woman’s place is in the home. Forever.
Final Grade: (B)
Words Chosen by Alex DeLarge