UNTIL THE END OF THE WORLD: DIRECTOR'S CUT TRILOGY (Wim Wenders, 1991, Germany) 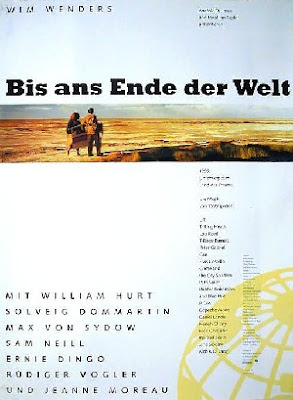 Claire escapes her congested life of materialism and embarks upon a great adventure from one end of the world to the other. Director Wim Wender’s ultimate travelogue mixes science fiction with a film noir detective story and adds a healthy dose of familial melodrama into this celluloid potpourri. With the world on the brink of annihilation from a rogue Indian satellite, whose radiation could contaminate the Earth if shot down by the United States, Claire begins her own nihilistic journey towards oblivion. She leaves her cheating boyfriend Eugene, a novelist whose words have become more important than living, and encounters bank robbers and a fugitive scientist named Sam Farber: a man who has stolen a device that will allow his blind mother to see once again.

Filmed in 1991 but set in the future of 1999, Wender’s set details and technological innovations are laudable with the foresight of GPS and laptop computers, digital cameras and web cams, years before their practical use. The set designs of a world gone mad with the dance of the dead, a population who thrives upon the momentary breath of life that could be extinguished any moment, of infrastructure falling into disrepair scrawled with physical graffiti, must have influenced Alfonso Cuarón’s CHILDREN OF MEN. Claire becomes enamored with Sam’s predicament and follows him while Eugene and a private detective are stalking them. They finally end up in the desolate Australian Outback, deep in a cavern after the nuclear fallout whose magnetic pulse could have destroyed the world. Sam is slowly going blind as he helps his mother to see, utilizing a device invented by his father: Sam is desperate for his father’s love and respect but it’s Claire who invites salvation.

Wender’s film is about the power of the individual, as she and Sam become addicted to their own electronic dreams, and yet are able to detach themselves from these currents and reach independent goals. It is also about technology and its usefulness…and destructive powers. The surreal dream imagery evokes the spirit of Edvard Munch’s works, like a silent scream of torment. Meanwhile, Eugene narrates the film in retrospect and we finally understand that he is writing the film from a good old-fashioned typewriter during his stay in the Outback, his insights and observations revealing more about the characters than they themselves acknowledge.

The excellent cast invigorates the script with powerful performances from William Hurt, Max von Sydow, Solveig Dommartin, Sam Neil, Jeanne Moreau, and a host of others. Sometimes the dialogue is a bit stilted and languid, falling like prose upon a blank page: that is, they often speak like characters in a book…but this could be explained by the fact that the film is Eugene’s novel in progress, a story created letter by letter as it speaks with metal teeth of an anachronism, whispered through a writer’s mind. The beautiful cinematography brings this fictional future to vibrant life, and the powerful soundtrack underscores their desires that float on ethereal wings. Finally, Claire reaches for the Heavens and becomes guardian of a toxic Earth that is healing itself…much like her own damaged but fiery spirit.