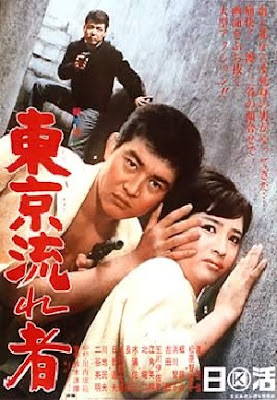 Tetsuya is a samurai hit man who values duty above all else, trying to walk the path of enlightenment through the dark night of his soul. Seijun Suzuki’s absurdist neon noir is a pantheon of trite clichés deconstructed and stripped bare, revealing a narrative element that burns like a noble gas.

Suzuki dismantles genre expectations in the very first reel, beginning the film not in black and white (like a “serious” noir-ish melodrama) but in a blown-out monochrome bled of all color. The anti-hero Tetsuya is introduced as a victim of a rival gang, as he seemingly allows them to pummel him into physical submission. We soon learn that loyalty kept him from fighting back, as his master Kurata attempts to go straight and place the life of crime behind them both. Of course, this becomes impossible so thus we have conflict and a plot involving a property deed worth millions and egos worth their weight in souls.

Suzuki’s twisting plot threads weave a syncopated narrative tapestry, like a torch song missing random key notes. The use of disorienting jump cuts streamlines the anecdotal economy, disallowing extraneous character development as the viewer is expected to understand by proxy. In one scene, Suzuki instigates a daring rescue as Tetsuya saves his femme fondue from a rival gang with an adrenaline car crash…only to cut in the middle and reveal the two of them at a local arcade, with no reference to the previous action. Suzuki takes us from point A to C with few establishing shots or movement during the films 82 minute run time.

Drenched in big neon glitter, the anti-hero traverses Tokyo’s brothels and Western style clubs with stylized transitions, set designs flooded in Day-Glo colors that seem to merge with actual location shots. This duality creates a surreal and dreamlike world for Tetsuya to wander, and the quicksilver action sequences are like James Bond on acid. Maddeningly brilliant and beautiful. Suzuki ends the film with a betrayal leading to a white hot oblivion though Tetsuya always remains true to the one that matters most. Himself.