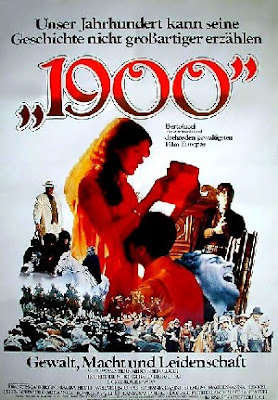 Two twentieth-century boys become separated by social and political war, existing in a purgatory of violent schisms dominated by sadism and entitlement. Bernardo Bertolucci simplifies the complexities of history by presenting the formula of Fascism, elemental ingredients of a tenure of terror born in the very DNA of the two protagonists, brothers by oath and enemies by obligation.
Olmo and Alfredo share the same birthday and birthplace, separated by a social hierarchy as natural as the very ground that the farmers till with calloused hands. As children they think like children, together and free to defy their elders and dream of escaping their bondage. But the storm of reality breaks upon them with the Great War, fragmenting their hopes and desires, an explosive and divisive conflict where each chooses his predetermined role...which is no choice at all. Olmo goes off to fight for family and country while Alfredo remains behind on the farm under the tutelage of his father, the Deus Ex farm Machina. Though they are eventually reunited, they have grown too far apart socially and politically, a battle that will rage for the remainder of their lives.

Two scene is particular show this chasm that divides Olmo and Alfredo, a dark scar that remains where they’ve been emotionally and intellectually cut apart. The first involves a prostitute that they intend to share, a beautiful lass who massages their manhood equally, but is soon corrupted by a toxic flaw in her genetic code: they are always unable to share peace (or a piece). The other concerns the fascist overlord Attila who mercilessly beats Olmo while Alfredo becomes spectator, grieving for his friend but also for himself, unable to exert control over his supposed employee. Alfredo realizes the tenuous position of his family (and all landowners) in this violent new economy.

Bertolucci’s golden cinematography is refracted by the lens of nostalgia, utilizing the farm as microcosm of Italy’s pre and post war social ills. He often visually equates the Padrone and his progeny with bloated cows and the fascists with gutted and squealing pigs, while the farmers are juxtaposed with clanking machinery of this social war, replacements who work not for money (or pride) but gasoline. The acting is dramatically overindulgent, and while Gerard Depardieu and Burt Lancaster seem comfortable with this hyper-realism, Robert DeNiro seems to sleepwalk through his lines an Donald Sutherland borders on camp. It’s a technical blemish but easily overlooked due to the power of the story and elegance of compositions.

The story comes full circle on the eve of Germany’s destruction as the fascists and wealthy landowners are razed, and in a wonderful crane shot Olmo and Alfredo continue the eternal struggle between classes, diminishing and diminutive. A jump cut then shows them as old men, jousting and cursing each other, until Alfredo wanders to the train tracks to relive a moment of his youth. But even he cannot stop the momentum of the future and lays his head to rest...one final time.