THE GIRL WITH THE DRAGON TATTOO (Niels Arden Oplev, Sweden, 2009) 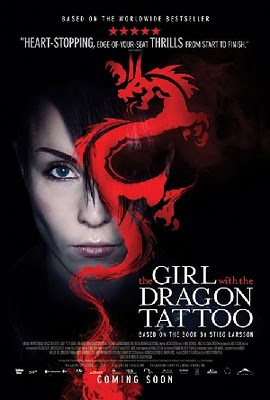 ﻿Lisabeth’s fiery spirit is inked upon her skin, a raven haired woman whose redemption is mirrored by the plight of a disenfranchised reporter, both victim of Patriarchal powers whose conflict ignites passion…and is cured by gasoline. Swedish director Niels Arden Oplev adapts his countryman’s novel into a pulse pounding thriller, an explosive journey through a young lady’s dark night of the soul. His camera doesn’t shy away from the ferocious sexual brutality, an important plot device that characterizes the turbulent heroine and subverts expectations: the remake will become an inane Hollywood fiasco, dumbed down for American audiences who are too stupid to read subtitles, who must be spoon-fed filmic pabulum that can be easily digested and passed through devoid of nutrient.
Oplev encapsulates a convoluted plot and expounds exposition without sacrificing characterization, and it’s the power of the two leads that fuels the narrative with a driving force, racing ever forwards even when it looks to the past. Michael Nyqvist as Blomkvist the defeated reporter, is imbued with a subtle patience and compassion, his face a reflection of honesty and intelligence: a man whose moral code translates into an honest living. Noomi Rapace as Lisabeth is both aggrieved and grieving, antisocial but not psychopathic, her beauty belies the burden of some unexplained trauma. She is victimized but a survivor, Justice a violent poetry written in flames.
The structure could have easily descended to a montage of computer icons and conversations, but Oplev deftly juxtaposes action with cross-cutting whose corollary leads to audience coronary, the poisonous fruit blossoms into suspense and emotional fission. Suspension of disbelief is expected as even Apple computers don’t function at light speed, correlating data in the nick of time. And research through dusty tomes lost in dungeon-like archives takes time, microfiche notwithstanding. Swimming with more than a few red herrings, the story leads from pressed flowers to a grainy photo, and through a chamber of horrors towards a surprising climax.
Final Grade: (B+)
Words Chosen by Alex DeLarge