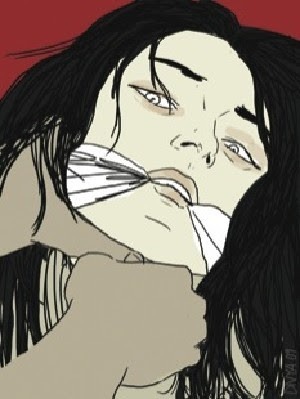 A commune’s philosophy of free love spreads a societal canker, a nihilistic avatar sheathed in human clothing who sates his libidinous needs with violent penetration. Nagisa Oshima condemns the anti-establishment as their worldview romanticizes utopia while blinded to the hungry wolf in the fold.

Oshima begins the story with a violent rape and murder, building expectations towards a standard crime drama thriller. But it soon becomes apparent that the film is much more rebellious, a penetrating social and emotional allegory concerning two women, where criminal justice and social hierarchy battle for supremacy in a world gone sour. Oshima’s style is as visually stunning as Kurosawa’s RASHOMON, embedded with hundreds of cuts to sweaty close-ups revealing paranoid eyes, reality interpreted like electrical impulses charged upon a damaged psyche. The Cinemascope compositions often separate characters by a vast gulf of indifference, or brings them together in a choking embrace, an eclipse of flesh, blood, and bone: a journey to the dark side of the soul.

Shino becomes the first victim in the film (though not the rapist’s first crime) and it’s obvious that the two share a common past. She is unaware of his intent but falls prey to his tempestuous prayer, penitent upon the alter of sexual abuse. Oshima focuses on emotional relationships and not the physical act, conjoining Shino and the criminal’s wife Matsuko like binary stars, their gravitational pull both keeping balance and slowly tearing them to shreds. Shino carries the burden of survivor’s guilt, and the knowledge that she owes her life to this despicable man. But her knowledge is limited: after attempting suicide years before, Shino believes he saved her life before ravaging her virginity (he explains, she was dead so it isn’t rape to fuck a corpse). But Oshima reveals that the rope fortuitously broke, she would have survived anyway, so another moral splinter occludes the narrative.

Matsuko’s guilt concerns her spurning the commune’s leader, whose response is to enter a dual suicide pact with Shino: as his life fades to black, he is the only witness to Shino’s assault. Matsuko must also decide that if she admits her husband is the Noontime Rapist, then her whole belief in the inherent goodness of human nature is flawed, that life is not (and never was) as she knew it. What should be an easy decision for the two women to go to the police and help solve this crime spree becomes a spiritual civil war leading to self-destruction, ignoring reality to grasp the ethereal bonds of delusion. Bob Dylan was right: the human maggots that infest Maggie’s farm would have been proud.