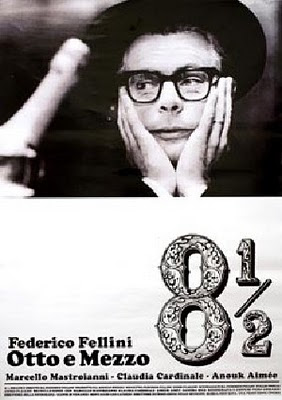 Guido is held prisoner within his own mind, a vessel stalled on the creative highway who can only dream of escape, victim of paranoid and prying eyes, surrounded by an anxious tension that tethers him to unfaithful reality. Director Federico Fellini writes himself into this elliptical narrative as Guido Anselmi, the cipher that decodes the heart of the story: asa nisi masa, a childish spell that reveals a wealth of imagination.

Fellini begins the film in a traffic jam, as Guido is trapped in desperate silence and isolation within his car, while crude and vulgar faces leer eagerly like carnivores hunting prey. Soon the car fills with smoke and he kicks the side window out: Fellini shows Guido’s feet then cuts to him sitting upon the car’s roof, creating a jump cut of dreamlike quality. Soon he is flying away through the clouds, free from doubt and fear until he notices a rope around his leg…and his nervous Producer grounds him once again. Fellini examines himself through the distance of a camera’s focal point, writing himself out of a creative stupor by writing about his uninspired morass: 8 ½ is a seemingly plotless film that is elegant in its honesty and lack of credulity, for we are never totally honest with ourselves and this is a crucial factor in Guido’s self reflexive fantasy. The science fiction conceit is Guido’s metaphor: a giant spaceship to escape the gravity of his situation. But most of all this is a comedy, as Guido learns to laugh and live and love, to become like a child once again and yet fill the bathetic dialogue with self-deprecating humor. 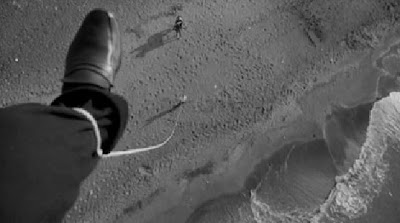 The stunning black and white cinematography by Gianni Di Venanzo creates a virile emotional atmosphere, careening between Guido’s figments and his fragmented actuality: this is arguably one of the most beautiful films ever captured on celluloid! Each close-up brings the characters into sharp emotional focus while lines and hard edges disappear into fantastical vantage points, like a highway through purgatory. Nina Rota’s jaunty score imbues the story with tonal synergy, an aural delight that is savored like a bath in vintage wine. 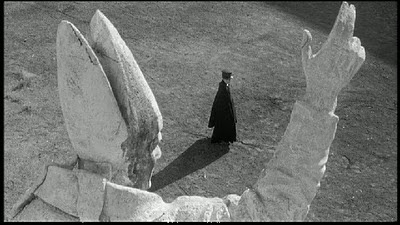 Fellini dissects his director’s personal life and troubled relationships, searching for the root of his woes by regressing into the past: when that fails, Guido revels in a glorious whiplash phantasmagoria. With a healthy dose of Catholic guilt and infidelity, badgered by the press and his Producers with millions of dollars on the line, Guido is pressured into becoming an inert corpse: he even crawls under the table during a press conference and kills himself…a visual spectacle of wish fulfillment. But Guido discovers that truth is only subjective, that the act of creating veracity destroys it, and he gathers his cast together and the movie folds in upon itself and he sees himself as the little boy marching off-screen…exit stage right.