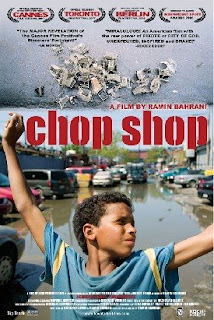 CHOP SHOP (Ramin Bahrani, 2007, USA) Parentless, little Ale and Izzie haunt this field of broken dreams, the empty husks of rusting automobiles and discarded souls their only companions. This world is starkly contrasted by the looming specter of Shea Stadium, the playground of the rich and famous: a world as foreign and unreachable to Ale and his sister as a trip to the moon. Director Ramin Bahrani paints an intimate portrait of our two protagonists; he colors the film with subtle emotional shades and hues, and the narrative structures an intriguing insight into their sibling relationship and unfettered love for one another. He captures the reality of America that many ignore; he is filming Queens, NYC…but it looks like a third world country. These are the lives of real people and not Hollywood caricatures; they are not acting the part…they are the part. This unobtrusive voyeuristic perspective is cinematically informal, like hanging out with friends on a Friday night, drinking beer, laughing, the daily worries a soft blur almost forgotten, and wishing that this could last forever. Ale’s tiny but heroic dream is to buy a junked Ice Cream Truck and start a business with his sister, to take control of their lives. He works in a Chop Shop all day saving every dime, sells stolen candy and bootleg DVDs, and Izzie slaves at a food stand and secretly sells her body at night. Bahrani’s mise-en-scene employs long takes and beautifully detailed deep focus compositions that translate into sublime emotional contradictions. Highways and train tracks surround the junkyard, vital transitions towards a brighter future, but Ale and Izzie are fixed in time and place with no other place to go, sadly fated to become society’s flotsam and jetsam. As hope fades, they sink deeper into the quicksand of despair but still dream of spreading their wings and flying away. (B+)
Words Chosen by Alex DeLarge